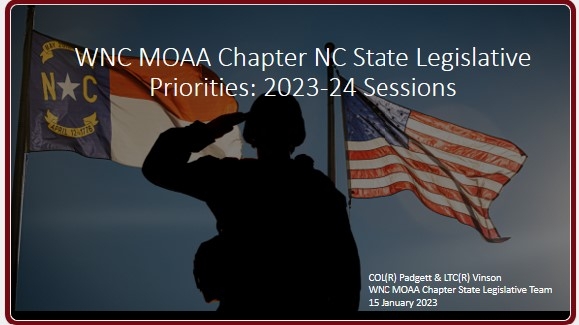 Request as many of our members as possible send the attached letter of the legislative priorities to the four State Senators and ten State Representatives throughout the months of June and July, the sooner the better. We also recommend the same letter be sent to the Speaker of the NC House, minority leader within the State House, and the NC Senate Majority Leader as well as the NC Senate Minority Leader.

As described in the 2021 Legislative Report, we have chosen, in alignment with our State and National MOAA and organizations, the following three priorities for the state legislators within Western NC to support. Packages have already been sent to each of the 14 total legislators in Western NC, but to follow up with individual letters from you to your specific State Senator and Representative will help us turn NC into a “Green” state, the measure used to rate states as to their friendliness to military and military retirees within each U.S. state.

The three priorities are, in order:

1. State Tax Exemption for Active-Duty Military and Retired Veterans. Western NC MOAA has decided to recommend support for HB 83 over four other similar bills before the legislature. Over 30 states already have such bills approved.

3. Support for four issues to be referred to Military Affairs. The four issues are: (1) Military Spouse Licensure Portability, which allows for temporary spouse licensure for active duty spouses while living in NC, (2) Licensing compacts, which requires licensing agencies to work with similar licensing agencies in other states to develop and participate in compacts to allow licensing across state lines, (3) In state tuition continuity for active-duty members and their families, and (4) Combat injured veterans tax fairness, which extends the statute of limitations for requesting a refund of State income taxes to conform to federal tax treatment.

The first and third priorities above affect active duty as well as retired military members in Western NC. The second is almost exclusively beneficial to military retirees.

TAKE ACTION! Click here to notify your representatives of your views!

Since our last report in 2020, the NC Council of Chapters (NCCOC) Legislative Affairs committee has been attempting to clarify the critical times required for contacts with our 10 State Representatives and 4 State Senators from Western NC.

As far as timing, the critical thing is to get our WNC MOAA state legislative priorities to our respective state Representatives and Senators before their yearly duties begin in January of each new year, especially following an election year. The second year, the nonelection year, all we need to do is to update the legislators of the progress for the previous year and inform the legislators of what our new priorities are in light of whatever progress was made the previous year.

Prior to that, though, we need to determine what our WNC MOAA priorities are. WNC MOAA President, Donna Culp sent out an email describing how we did this last year, stating that Michael Padgett, as our chapter lead for State Legislative matters, determined those priorities. That is only part of the process. A more detailed discussion follows:

First, in coordination with the NCCOC Legislative Affairs committee, Michael, Donna, and WNC MOAA Federal Legislative Affairs chair Vivianne Wersel reviewed the national priorities. Next, we reviewed recommendations provided to us by the State MOAA Legislative folks, led by Iggi Husar. Then, Michael recommended we focus our priorities on three areas, two of which matched the State and National priorities. The third priority, exemption from NC State income tax on retired military pay, was initially advocated by our State MOAA and many of our state MOAA Chapters, but for some reason, the State MOAA Legislative folks dropped it from the State priorities. Several NC MOAA Chapters voiced strong objection to the omission, which resulted in the State MOAA President, Jim Brumit, declaring that each State MOAA Chapter would decide whether to include the taxation issue as a priority for itself. Thirty-three other States already have passed similar legislation. Michael consolidated all of the information into a briefing, with the three priorities for our Chapter, and sent it to Vivianne and Donna for review and approval. Both approved, and the packages for our priorities were sent to all State Legislators representing WNC in March 2021. Due to our earlier efforts to establish personal meetings with each of the 14 Legislators over the summer (with around 8 of the 14 meetings accomplished), 6 of the 14 responded with positive notes indicating their intent to support our priorities in this year’s Legislature. We believe the rest took note as well, but just did not respond directly to us.

Follow ups are planned for the rest of this year.

Donna then decided on a second action that we hope will help us achieve the MOAA priorities for WNC Veterans. She requested Michael draft a letter that she could send to all of our Chapter members so that they could use it as a format for their own State Representative and Senator. This was done in March and April. The belief is the more of our membership to encourage making NC a military-friendly state the better. 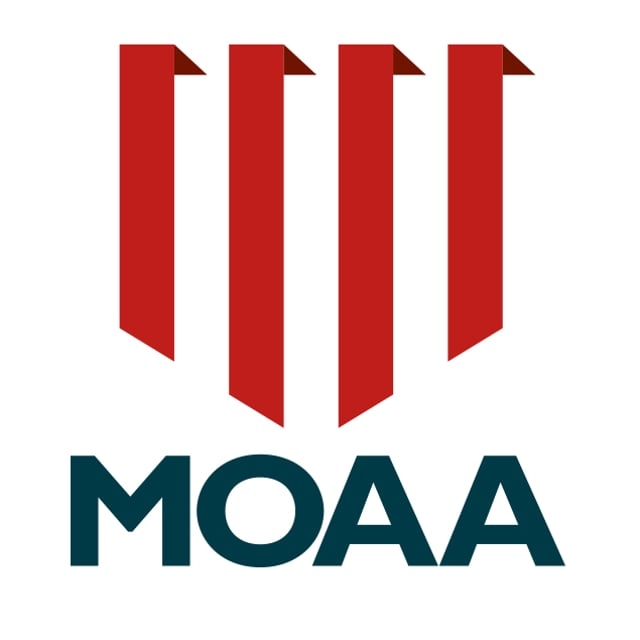 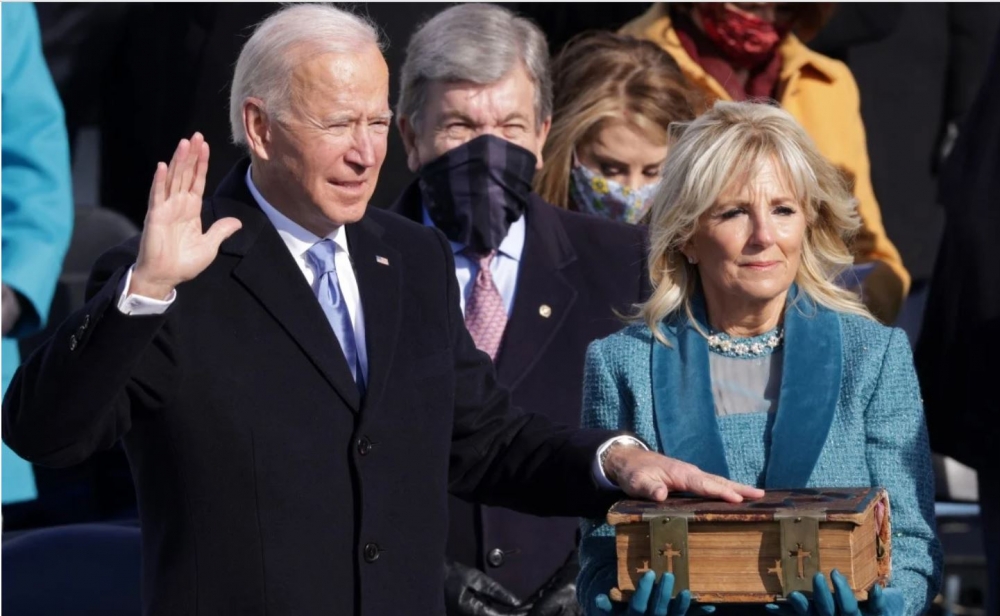 The first 100 days of a president’s term is a time where the new administration considers [more...]

CALL THESE CONGRESSIONAL LEADERS (NOTE: THIS LIST IS GOOD THROUGH [more...]

A bill must be passed by both the House and Senate in identical form and then be signed [more...] 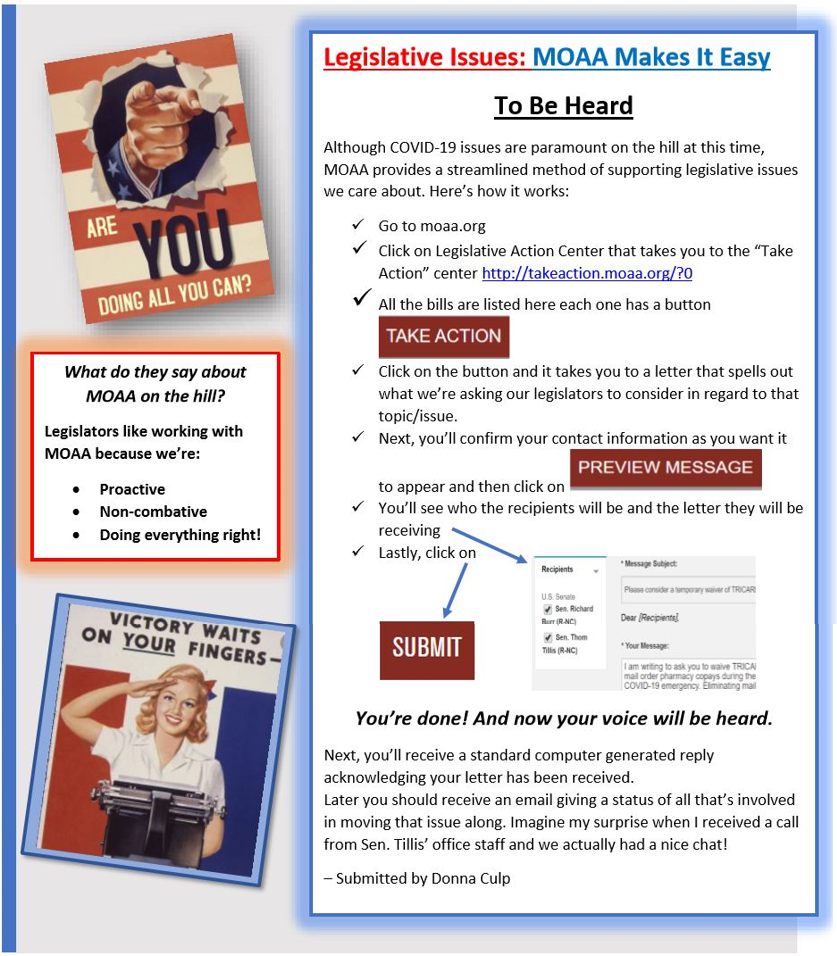 Legislative Issues: MOAA Makes It Easy To Be Heard

How to Take Action on Legislative Issues Using the MOAA website.

Although COVID-19 issues are paramount on the Hill at this time, MOAA provides a streamlined [more...]

How to Educate Your Lawmaker for Beginners!

For 15 years I have walked the halls of Congress. I did not take a class or even receive [more...] 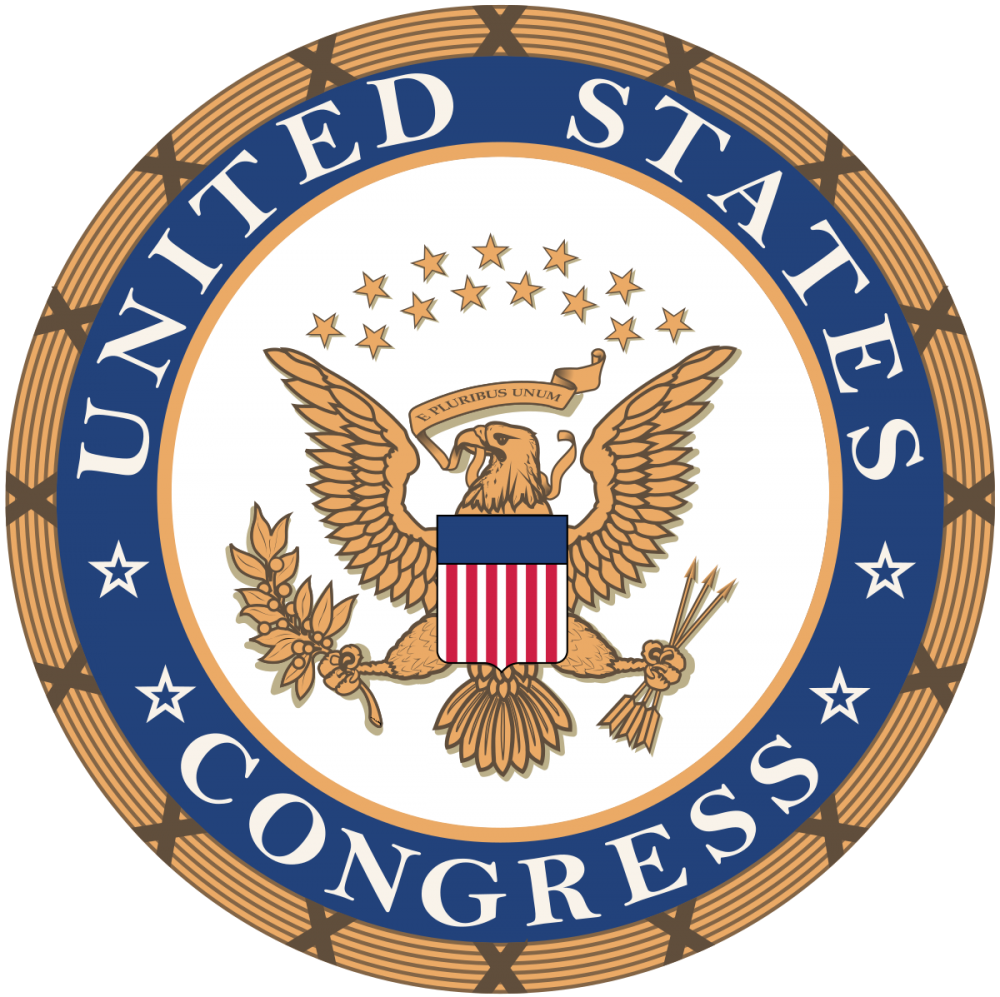 Meeting with Your Congressional Members and Staffers

“Congressional staffers have significant influence in the modern Congress. Get to know the staffers who work on your issues and educate them (Gibson 2010)”

Who is your member?

• Unsure who your congressional [more...]

Currently the committee is comprised of Robert Padgett and Vivianne Wersel. and both [more...]